Gardentoy is an interactive installation set in a pergola, a wooden structure that seems to come straight out of a backyard or a public playground. The visitor walks around with a screen, showing images of the bedroom, living room or kitchen of a suburban cottage, with dimensions corresponding to those of the pergola structure. At first sight the images look strikingly real, but when you look closely they turn out to be 3D-images.

Gardentoy reveals the similarities between a suburban environment and a game world. You wander through the interior of a suburban house, as if you were in a computer game. When playing a computer game, its realism might be quit impressive at first. Only later one realizes that its structures and textures are constantly repeated and reused. The suburban setting, seemingly organic and authentic, turns out to be an artificial construction as well. 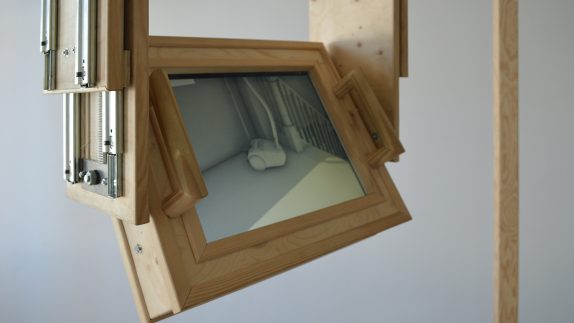